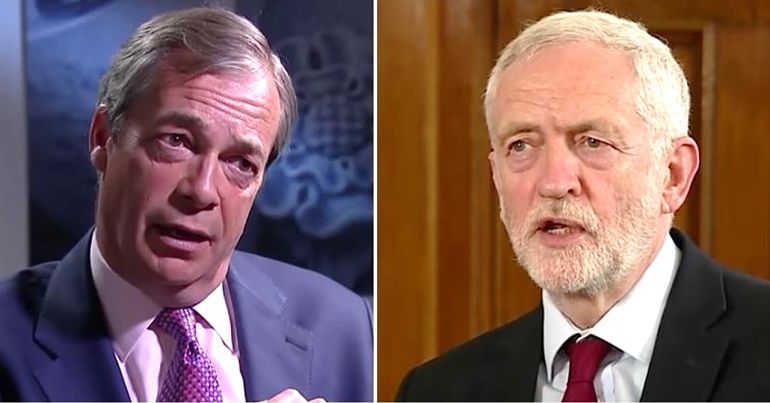 This article is one of three Opinion pieces looking at what’s next for Brexit in the aftermath of the EU elections. You can also read Josh Funnell argue why Labour must now campaign fully to Remain and Frea Lockley on how racism has been the biggest winner from Brexit.

Nigel Farage’s Brexit Party won big in the EU elections, as did the Liberal Democrats. The Conservatives and Labour did not.

Since the results came through on 26 May, a near-universal cry has bellowed out from Labour’s ranks: Jeremy Corbyn must support a second referendum on Brexit. According to the accompanying logic, Corbyn’s resistance to throw himself into such a commitment has sent ‘liberals’ running to the Lib Dems. And in order to get supporters back, Labour must give them the referendum they want.

Funnily enough, the elephant in the room isn’t getting much attention. That is, Farage’s Brexit Party stormed ahead of the Lib Dems in the election. It won 31.6% of the vote in contrast to the Lib Dems’ 20.3%. So why aren’t more people demanding Corbyn pander to these voters? After all, pleasing them could potentially give the party a bigger boost. It could also give these voters an alternative ‘home’ to the party of hate peddler Farage.

We all know why. It’s because this isn’t about Labour’s support. It’s about the Remainers getting to remain in the EU, come hell or high water. Even if it ruins the Corbyn project (some would consider this a bonus). And even if it ushers in, brace yourself, a Farage-led government.

If the cap fits

Farage’s entire EU election campaign centred on one word: democracy. He told people at rallies that a vote for his party was a vote for democracy. He also effectively accused Remainer politicians of breaking down the country’s “civilised democracy” after someone threw a milkshake over him.

Of course, listening to Farage wax lyrical about democracy and civility makes you want to spew. Because there was nothing civil in Farage’s racist anti-refugee posters in the 2016 EU referendum. And there’s nothing democratic about refusing to reveal who your new party’s donors are, after previously being allegedly bankrolled by a multi-millionaire.

But it resonated in the Brexit Party’s campaign. And it was a gift from Remainers. Their refusal to accept the Brexit result handed Farage that buzzword on a plate. How could it not be anti-democratic to want to overturn that vote? Many may argue that the referendum campaign itself wasn’t democratic, filled as it was with lies, misinformation and illegal spending. But what modern election in the UK hasn’t involved those things?

The system itself is broken and in need of reform. But Remainers are only declaring one vote within our crappy democracy null and void. Some would say that’s because this vote – Brexit – is more momentous and permanent than the others. Certainly, leaving the EU is different in scale to electing a 5-year fixed term government. But vast amounts of countries exist, happily, outside the EU. And leaving the bloc isn’t as momentous as, say, the rapid destruction of our living world. Yet, although the Green Party did well in the EU elections, people didn’t flock to it en masse to throw their weight behind action on that monumental issue. In fact, its growth in support may largely be down to its pro-second referendum position.

With parliament now in a complete stalemate over how to proceed with Brexit, of course, some say that handing decisions over to the general public via a confirmatory vote is the only way to move things forward. Arguably so. But the fact that many calling for such a vote want Remain as an option on that ballot shows it’s not just about making progress. It’s about having the option to scrap Brexit altogether.

No, this isn’t about skulduggery, scale or ending the stalemate. It’s about people who are democrats when it suits them. And clearly, right now, they are not.

This has unquestionably invigorated Farage’s Brexit Party. We have been here before though. Until the Brexit vote, Farage sullied our national conversation on a regular basis, as the leader of UKIP. Then, after the vote to leave, people dropped his party like a ton of hot bricks. They did so, of course, because they thought it had served its purpose. Little did they know that three years later Brexit would still be an uncertainty.

Arguably, they’ve been burned. So would they drop Farage and his new political incarnation so quickly a second time if his party stood in a general election? I wouldn’t bet on that. In fact, in the event of a general election happening before Brexit is secured, Farage might do quite well. Even after Brexit’s done, given the tumult of the last three years, people might decide he’s best kept around for safekeeping. Once bitten, as they say, twice shy. Whether that gets the Brexit Party a foothold in parliament – or government – depends on who’d be willing to work with it. After the Tory/DUP deal and the Tory/Lib Dem coalition, nothing would surprise me.

In the event of a second referendum, and remaining in the EU, it’s anyone’s guess what would happen. Perhaps many would vote for Farage in protest. Or maybe vast swathes of people would turn their backs on politics. Certainly, it’s hard to see how it would unite the country in any way.

Although, importantly, only 37% of eligible voters turned out for EU elections. So perhaps the majority of the country doesn’t care much about the Leave vs Remain ‘cultural war’.

And what of Labour? Well, it certainly risks its ‘heartlands‘ if it backs a second referendum. It may well retrieve some people who’ve flirted with the Lib Dems in the EU poll. The Remainers in Labour’s ranks say this is necessary to save the party’s skin in the next general election. But what of its soul? Under Corbyn, the party has changed. Rather than ignoring the will of the people, it’s trying to listen to them. Instead of building policy around what’s good for a few, it’s looking for ways to satisfy the many.

In short, it’s now more democratic, on a country-wide scale, than it has been for a long time. It may not hold that reputation for long after backing a second referendum, though. And that would suit Farage and his far-right cronies just fine. Like it or not, in their attempt to stop a hard-right Brexit, or scupper leaving at all, Remainers are invigorating the far right.