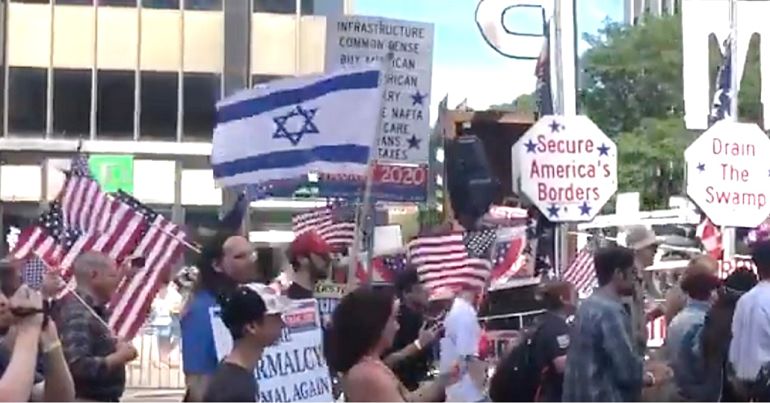 As supporters of Donald Trump held a ‘straight pride’ event in Boston on 31 August, Zonszein tweeted about the presence of Israeli flags, insisting:

She continued by saying:

It’s really sad for me. I mean Israel was obv never an idyllic place that granted social equality-but there was a time the flag symbolized socialism, welfare, humility. Even if never a reality at least there was the symbol. Now it represents the absolute worst of the West

The historic symbolism behind the Israeli flag

Around a third of the world’s flags (including Israel’s) contain religious symbols. As one rabbi wrote at Chicago Jewish News, the symbol on the Israeli flag – the ‘Star of David’ or Magen David – “can indicate either religious or secular Jewish ethnic identity”. Haaretz explains that, while the “use of the Star of David as a Jewish symbol only became widespread in 17th-century Europe”, it is “the most common symbol for expressing Jewish identity today”.

Highly regarded Jewish historian Gershom Scholem wrote about the symbolism of the Star of David in 1949. He described how, historically, “the six-pointed star is not a Jewish symbol”, but that some people saw it as “the symbol of eternal harmony and peace, the unification of opposites”. He also explained that the sign really took off when the Zionist movement (the ethno-nationalist call to colonise Palestine and establish the state of Israel) “chose it as a symbol for Zionism” in 1897. At this point, he said, “it was not explicitly identified with a religious association”. Through the horrors of the Holocaust, however, the symbolism grew even more. As he insisted:

Under this sign [Jewish people] moved along the road of horror and degradation, struggle and heroism. If there be such a thing as a soil that grows meaning for symbols, this is it.

Scholem himself moved to Palestine in 1923 as a Zionist and “religious anarchist”. Jewish Currents described him as “a committed advocate of binationalism in the region—granting equal rights to Jews and Arabs in a unified democratic system—and a leading member of… a small pacifist group dedicated to this cause”. As such, he opposed the crimes that other Zionists committed against Palestinians. And he would likely be a firm opponent of Israel’s current government.

Waving an Israeli flag doesn’t mean you’re not racist. In fact, it can mean the opposite.

Viewers of the Boston ‘straight pride’ event could clearly see Israeli flags. And many were not at all surprised:

No right-wing freak show is complete without Israeli flags https://t.co/K9ynUUBouf

I've been photographing right wing demos (Pegida-AfD) here in Berlin the last years. There is always an Israeli flag. Mindbending to this Jewish gal. pic.twitter.com/UH79GoaLC9

UK far-right figure Stephen Yaxley-Lennon (aka ‘Tommy Robinson’) has also consistently sought to associate himself with support for Israel.

Donald Trump himself, meanwhile, recently echoed a far-right trope which the Nazis had used. And as journalist Mehdi Hasan highlighted, Trump’s firm support for Israel’s far-right government doesn’t mean he can’t be antisemitic. Indeed, Trump has quite a track record when it comes to antisemitism.

And the Boston rally seemed to be no different. One journalist, for example, reported finding an antisemitic conspiracy theorist:

David here at the Boston Straight Pride Parade has been going on for the last 10 minutes ranting about how the Jews faked the holocaust, rule the world and created the LGBT movement to destroy America pic.twitter.com/awkkds7AAd

As +972 Magazine has highlighted, Israel has both a historical and recent record of supporting far-right governments around the world while receiving their support in return. It supported apartheid South Africa, Cold War dictatorships in Chile and Argentina, and the genocidal regime in Rwanda. And today, it’s moving more and more to the right, becoming bolder in its discrimination as it does so. It’s not just the Trump administration which is supporting Benjamin Netanyahu’s hard-right government, either. It’s also the far right in Italy, Ukraine, Poland, Hungary, Germany, and beyond – many of which have fascist and antisemitic pasts (and presents).

Far-right peas in a pod

In short, the Israeli state’s brutal occupation and colonisation of Palestine has a lot in common with the far right. Because it ticks pretty much all of the bigoted boxes that these people can get behind. Sadly, that now means commentators like Zonszein see waving the Israeli flag as “synonymous” with supporting the “absolute worst of the West”.