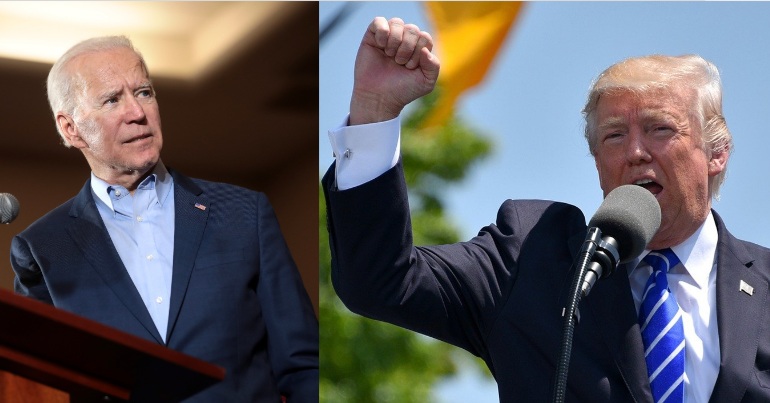 The US presidential election is nearing. On 3 November, US voters will head to the polls in what has been dubbed “the most important election in US history”. As The Canary has extensively documented, incumbent president Donald Trump is incompetent, reactionary and, worst of all, has shown signs of overt authoritarianism. And so a victory for Democratic Party challenger Joe Biden is being presented in much of the corporate-owned media and amongst the liberal establishment as some kind of deliverance from evil.

But the reality is that it was Washington insiders like Biden, who pose as ‘liberals’ but are actually center-right, that led to the rise of Trump in the first place. We need to push back against the dangerous idea that removing Trump will return the US to some kind of golden era. Because Trump is, in reality, only a marginally worse incarnation of a neoliberal and imperialist status quo that has existed for decades and has been administered by presidents from both of the US’s major parties.

Biden in the lead, but could be complacent

Most major US polls show Biden in the lead. Even the usually cocksure Trump has on occasion conceded that he is the underdog in the race. There is a growing consensus that his inept handling of the coronavirus pandemic and the coinciding economic fallout have damaged Trump’s standing amongst the wider public, leaving him largely dependent on his hard-right base for support.

Some, however, have pointed out that Biden’s comfortable lead might end up as complacency. Like 2016 Democratic Party nominee Hillary Clinton, Biden and his running mate have been travelling to traditionally Republican-voting states like Georgia and Texas to campaign, which implies that they’re aiming for a landslide. But critics have pointed out that failing to pay enough attention to key battleground states like Michigan could ultimately cost them the election.

But that’s not the point

Whatever the ultimate outcome, however, there is a larger, overarching reality that’s worth examining.  Because the central premise of those presenting a Biden victory as a triumph of good over evil is highly dubious. To be clear, Trump’s presidency has been a veritable horror show in its own bizarre way. From enabling racists and extremists at home to cozying up to authoritarians and far-right rogue states abroad, Trump has sunk the US government to new depths of depravity. So the idea that Trump’s presidency is no worse than any president that came before him should be rejected.

But the corollary of this narrative – that the presidency of Barack Obama and other predecessors represents some golden era in which the US government was doing well by its people and influencing the wider world in a benign way – needs to be challenged also. Because the reality is that the Obama presidency was a sordid compendium of neoliberalism at home and ruthless imperialism abroad. Though he issued lofty promises of ‘hope and change’ on the campaign trail, Obama’s presidency was largely a continuation of the policies of his recent predecessors of both parties. And it was this reality that explains perhaps more than anything why a buffoonish outsider like Trump could rise to power in the first place.

Driving people into the open arms of Donald Trump

After eight years of Obama, many people were rightly fed up of being given constant reassurances by establishment Democrats that they would see real reform leading to improvements in their lives yet simultaneously finding their living standards getting worse and worse with every passing year. So when Hillary Clinton said on the campaign trail in 2016 that she would deliver real progressive reform, she lacked credibility. This was due to her association with the Obama administration, for which she served as secretary of state, and the center-right establishment wing of the Democratic Party more generally, which her husband former president Bill Clinton is perhaps the most influential figure of all.

As a result, a large number of people who previously voted Obama, and even one in ten who supported Bernie Sanders in the 2016 Democratic Party primary, decided to take their chances with Trump. After all, Trump did offer promises to “make America great again” and “drain the swamp”. These promises, of course, have turned out to be completely empty. But as is so often the case in politics, image often counts more than reality.

As Obama’s running mate in the 2008 and 2012 election, and his vice president during his two terms in office, Biden perhaps shares even more responsibility for this failure than Clinton, and perhaps more than anyone else other than Obama himself. If he were to win, therefore, his presidency would very likely pave the way for the rise of a second far-right insurgent like Trump sometime in the future. As author and Jacobin columnist Branko Marcetic, who The Canary interviewed earlier this year, put it in his book Yesterday’s Man: The Case Against Joe Biden:

To return the United States to any version of normality that won’t just lead the country straight back to another Trump, the eventual Democratic nominee will have to do two things: they’ll have to beat Donald Trump at the ballot box, thus removing him from the White House; and they’ll need to midwife a fundamental break from the political status quo, removing or mending the conditions that led to his rise in the first place. This book makes the case that Joe Biden, beloved elder statesman and current [Democratic primary] frontrunner, will not do the second and may well fail at the first.

Voices from the Democratic establishment offer assurances that Biden will adopt some of Sanders’ policies in order to retain the loyalty of Sanders’ supporters within the Democratic Party big tent. But the reality is that for perhaps as long as a century, the Democratic Party has captured progressive movements and made promises to listen to them, only to dismiss their proposals as ‘unrealistic’ once they’re in power.

The reason for this is straightforward: just like Republicans, establishment Democrats take campaign contributions from corporate donors and other wealthy interests. Once in office, they then serve those interests rather than the interests of their constituents. In February 2019, for example, The Canary reported that a leaked slide show appeared to show that current House of Representatives speaker Nancy Pelosi had a plan to sabotage universal public healthcare provision because of her close partnership with ‘stakeholders’ – i.e. the US private healthcare and pharmaceutical companies that give to her electoral campaigns.

Biden himself is no different and is, in fact, perhaps the ultimate example of an establishment Democrat who kowtows to corporate interests. As The Canary has also previously reported, his presidential campaign has received hundreds of millions of dollars from corporations and wealthy individuals. And this is nothing new. Throughout his career in the Senate, he was close to numerous private business interests based in his home state of Delaware.

In short, if Biden wins the presidency, the US will return to a status quo ante that is only slightly less terrible than what we have now. So just as it is wrongheaded to think Trump’s rise came out of a vacuum, there is also great danger in presenting Trump as some kind of uniquely evil figure. The reality is that he is just a marginally more extreme and unhinged administrator of a neoliberal and imperialist status quo that had been in place since long before he entered the political realm.