In both their budget speeches, Hammond and Corbyn threw 20% of the population under the bus [OPINION] - Canary 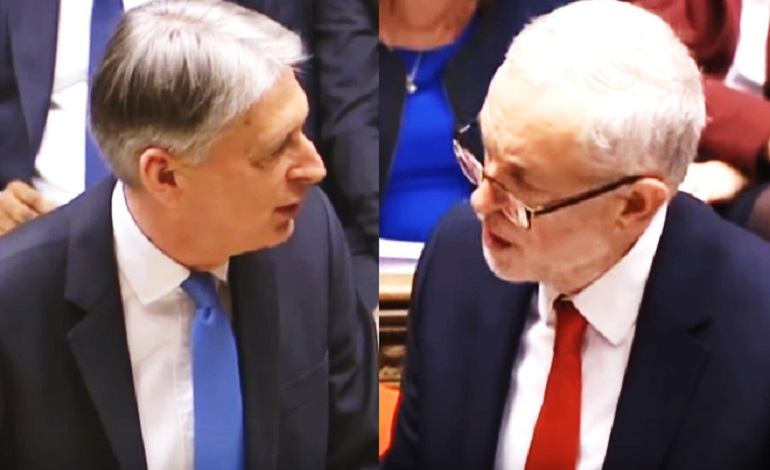 Amid the frenzy of the autumn budget, from ‘millennial rail cards‘ to ‘sticking plasters‘, there was one word that for me was glaring by its omission. And considering it represents 20% of the UK population, you’d think that Philip Hammond and Jeremy Corbyn would have given it a mention. But they didn’t. And that word is ‘disability’.

A quick scan using your internet browsers’ ‘Find’ function shows that ‘disability’ did not feature in either Hammond’s or Corbyn’s speeches. The Labour leader did say:

Too many are experiencing… long-term economic pain. And the hardest hit are disabled people, single parents and women.

But otherwise, that was it. And for me, it sums up the political attitude to disabled people entirely. That is, important when politicians want to look good; not so important in what they view as the grand scheme of things.

There are an estimated 13.3 million disabled people in the UK; 20% of the population. And for seven years, this community has been subjected to what the UN called “grave” and “systematic” violations of its human rights, at the hands of successive Conservative-led governments. The situation is so serious that one UN representative said the government had created a “human catastrophe” for disabled people in the UK.

Figures from 2015 showed 90 people a month were dying after the government told them they were ‘fit-for-work’, when in fact it should have been supporting them. This is how far the rights of disabled people have regressed in the UK. Yet neither politician felt the need to dedicate any part of their speeches to disabled people.

One issue sums up their wilful ignorance best: the ongoing dispute between transport unions and Southern Rail.

What’s good for the goose

At the heart of the dispute are alleged breaches of the Equality Act 2010, because disabled people can’t just ‘turn up and go’ at every station; at some, they have to book assistance 24 hours in advance.

Now, imagine if the BAME or LGBTQ+ communities were told that, if they wanted to get a train quickly, they couldn’t. There would (rightly) be a public outcry. But politicians, companies and much of the public think it’s fine for disabled people because, well – y’know. They have wheelchairs and stuff, right?

Wrong. The situation encapsulates what’s known as the “social model” of disability. It says that disabled people are only disabled because society makes them so – for example, companies not investing properly in the railways so disabled people can get a train like everyone else. Or disabled people not being able to enter a building because it only has a flight of steps.

No person is disabled because of their disability. They are disabled in spite of it. And it’s that which the public and politicians, by and large, fail to realise. They are happy to see disabled people as a sub-species, now so far removed from the social model it’s untrue.

My friend and activist Paula Peters summed it up best recently. She called Theresa May a “murderer”, and she’s not far wrong. Politicians’ wilful disregard for disabled people is killing them. And by ignoring the community in both their speeches, Hammond and Corbyn have, to me, declared their positions: they are fine being seen allowing disabled people to die.

I’m tired of writing about this, but I’m more tired of ignorant politicians and their supporters ignoring my friends and loved ones. Enough is enough.