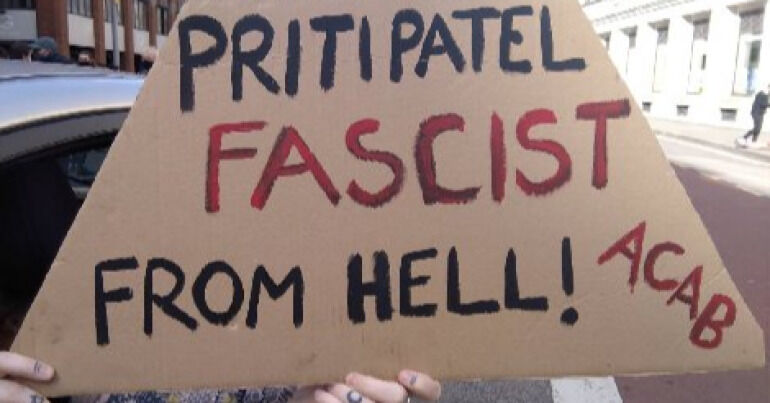 For the government, it’s convenient that 19 July is known as Freedom Day. Because if we’re kidded that we’re getting our freedoms back – freedoms like going to clubs and coughing on people freely – then we might not see what they’re actually stealing from us.

Never before have we seen such an erosion of our rights than during this Tory government’s rule. Bills have been conveniently passed under the radar by Johnson, Patel & co while the country has been preoccupied by coronavirus. It’s important to remind ourselves of the sinister laws that have been passed, or are set to be passed, since the coronavirus outbreak began.

There was the highly dangerous Covert Human Intelligence Sources (CHIS) Bill, also known as the ‘Spycops Bill’, which passed through parliament in January. This new act authorises covert agents, such as police officers, MI5 agents, or military personnel, to carry out legally what would usually be considered criminal conduct. There’s no limit to what criminal conduct is permissible in the bill, so there is no law prohibiting undercover operatives from carrying out murder, torture, or sexual offences. And, of course, the act has legalised all activity of undercover police officers, at a time when the undercover police are supposedly being investigated for abusing women.

The CHIS Bill largely went under the radar and passed without much public opposition. At least the same can’t be said for the Police, Crime, Sentencing and Courts Bill. The bill has passed through the Commons and is now onto its second reading in the House of Lords. Thousands have taken to the streets to protest this mammoth piece of legislation, which will see Gypsy Roma and Traveller communities criminalised for trespass, and where anyone who has caused a “serious annoyance” could face prison for up to ten years. The bill even has a whole section giving police the right to shut down one-person protests.

Then there’s the racist Nationality and Borders Bill, which has reached its second reading in the House of Commons. The bill furthers the Tory government’s hostile environment policies, and seeks to put refugees in prison for up to four years just for landing in the UK in search of safety. It will have a devastating effect on anyone hoping to claim asylum in the country.

This bill, like the spy cops bill before it, is largely passing through unnoticed by the public. Conveniently for the Tories, the easing of lockdown restrictions means that the second reading has barely been given a look-in by the mainstream press.

Last week we saw the Health and Care Bill passing its second reading in parliament. A bill that, according to The Canary’s Peadar O’Cearnaigh, “could downgrade the NHS to more closely reflect the profit-driven US healthcare system”. Of course, it will be corporations which profit from this bill, while the lives of the public will be put at risk. The bill is set to cause “mass preventable harm and death of patients, our loved ones, our family members, our friends.”

Calling today ‘Freedom Day’ when our freedoms have never been so threatened is a cruel irony. There seems to be no end to the Tory government’s hungry drive to spy on people, lock dissidents up and privatise what’s left of our public health. We need to keep a close eye on the bills that are yet to pass and fight them at every step.