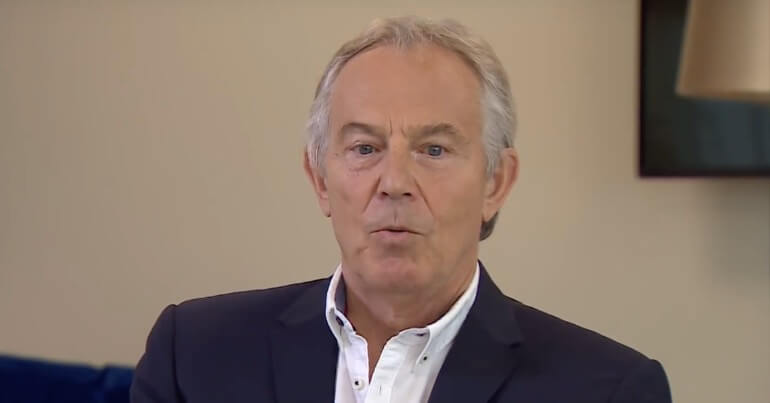 Tony Blair’s latest controversy should leave Labour with no choice but to expel him from the party.

The former prime minister has escaped exile one too many times. But his actions are indefensible. And his most recent fail should surely be the final straw.

Blair has just been photographed smiling alongside Brazil’s fascist president Jair Bolsonaro. The former Labour leader met Bolsonaro at the World Economic Forum and looked more than happy posing alongside the openly racist and homophobic president.

As Tony Blair does PR stunts with racist gay hating fascist Bolsonaro, when will his last apologists stop defending him, and when will he be expelled from the Labour Party https://t.co/ygPpjwsvTZ

Blair isn’t afraid of criticising leaders he doesn’t agree with, often choosing to criticise his own party’s left-wing leadership. But it seems this animosity doesn’t extend to fascists. They are greeted with smiles instead.

Bolsonaro has already amassed a horrific record in his short time as president, unleashing further misery onto Brazil’s minority populations. His neoliberal plan for economic prosperity is specifically and explicitly targeting Brazil’s indigenous, LGBTQI+, and poorer communities (which are overwhelmingly Black).

The self-proclaimed “proud homophobe” has previously said “If I see two men kissing in the street, I’ll hit them”, and that he “would be incapable of loving a homosexual son”. He also described immigrants as “the scum of the earth” and claimed residents living in communities founded by African descendants who escaped slavery “do nothing” and “are not even good for procreation”. Back when Bolsonaro was a congressman, meanwhile, he told a congresswoman that she was “not worth raping” because “she is very ugly”.

Being the architect behind ‘Blair’s babes‘ and Labour’s expansive immigration policies, you would have expected Blair to be vehemently opposed to even being in the same room as someone like Bolsonaro. But it seems the former PM’s dignity didn’t quite stretch far enough to resist a photo opportunity. His actions here are shameful. The Labour Party should’ve expelled Blair following the devastating invasion of Iraq. It must stop letting him get away with completely indefensible behaviour.

Blair masquerading as a statesman at international conferences after his criminal 2003 invasion of Iraq should sicken even his most ardent supporters. His unnecessary war saw the murder of over 500,000 Iraqis (or at least a million, according to some). It also facilitated the rise of Daesh (Isis/Isil) and the civil war that followed. Blair still defends his disastrous intervention, though, claiming that he acted in “good faith”.

In response to criticism from Corbyn, Blair asserted that Corbyn wasn’t able to make the “difficult decisions” that world leaders have to make. In reality, Corbyn predicted exactly what would happen with Iraq during a speech in 2003. If Corbyn had had his way, the obliteration of Iraq would never have happened.

Blair is a war criminal. And war criminals should have no place in British politics – let alone in a supposedly progressive political party.

In his most recent attack on Corbyn, Blair stated that “the Labour party is lost… the game’s over”. The reality is that Labour has only lost one thing: patience with Blair. Membership figures soared following Corbyn’s leadership victory, with the number of members now standing at a huge 540,000 people. The 2017 general election saw Corbyn’s Labour exceed all expectations, despite the relentless mainstream media smears and scaremongering. The idea of democratic socialism with Jeremy Corbyn at its helm saw Labour’s vote share increase by more than that of any labour leader since 1945.

The conclusion is simple. The party has rejected Blair’s stagnant neoliberalism (capitalist extremism) and Labour members want real change instead. The Blairite faction is now heavily outnumbered in the party, and ‘New Labour’ is as good as dead.

Labour has returned to its grassroots under Corbyn. If any lesson has been learnt over the past two decades, it’s that Labour should always be a socialist party. Unlike Blair, Corbyn is finally offering real opposition to the Tory party instead of diluted appeasement. The resentment against neoliberalism is evident everywhere. The world is growing tired of neoliberals, from Hillary Clinton to Emmanuel Macron. And far-right candidates are thriving as a result. But while Corbyn fights this far-right resurgence, Blair is standing alongside them.

The murder of many hundreds of thousands of people in Iraq should’ve been enough. But cosying up to fascists must be the final straw. Tony Blair is no longer an asset to the Labour Party; nor does he represent the party’s values. Labour must bring this dark chapter to an end and wave goodbye to the disgraced former leader immediately.

CORRECTION: Updated at 4:25pm on 25 January to clarify that Bolsonaro’s “not worth raping” comment was directed at a congresswoman, not a reporter.