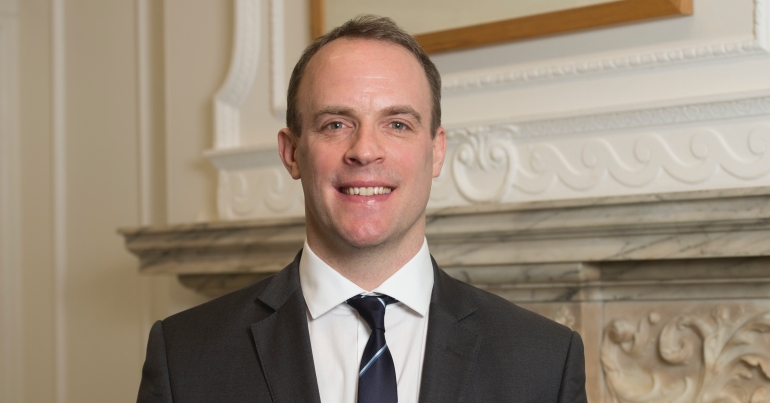 One country is showing its intent to create chaos in the Middle East. From sparking conflict in the one area in Syria where there was previously peace, to creating a humanitarian crisis in an attempt to bribe Europe to support its war in the region, Turkey is engaged in a dangerous power game that is killing people and putting lives at risk.

But Turkey is a NATO ally. And the UK is desperate for post-Brexit trade partners. So it’s perhaps no surprise that foreign secretary Dominic Raab is sucking up to Turkish president Recep Tayyip Erdoğan. And in one tweet, Raab showed dangerous contempt for the thousands of people threatened by Erdoğan, a complete lack of understanding of the political situation in Syria, and exactly why he’s unfit for his job as foreign secretary:

I was appalled by the tragic deaths of more than 30 Turkish soldiers in #Idlib following brutal attacks by the Syrian regime. Today I expressed my deepest condolences to President Erdogan.🇬🇧 supports our friend and NATO ally Turkey’s efforts to re-establish the 2018 ceasefire. pic.twitter.com/MjjkuXnIp6

Erdoğan has recently caused a humanitarian crisis on the Turkish/Greek border in his attempt to use Syrian refugees as pawns in his power grab in Syria.

In March 2016, Turkey signed an agreement with the EU that gave Turkey £5.2bn to help resettle and support refugees in the country. Since then, Erdoğan has used these people’s lives as a threat. In October 2019, for example, Erdoğan stated:

We will open the gates and send 3.6 million refugees your way.

Now Erdoğan has acted on that threat. Not only has he ‘opened the gates’, Turkey has provided transport with buses taking refugees to the Greek border. This has led to heartbreaking scenes as, according to the UN, 13,000 people arrived at the border by 29 February. Turkish authorities claim one person was killed after the Greek authorities opened fire. Greece denies this allegation. And it’s a crisis that’s getting worse by the day.

Meanwhile, journalists in Turkey are facing arrest for trying to cover the unfolding crisis. On 29 February, four journalists were detained. Gulnoza Said, Europe and Central Asia program coordinator of the Committee to Protect Journalists, stated:

As Turkish authorities crack down on journalists covering refugees in the country, they are revealing how little they care for the freedom of the press. Authorities must immediately release journalists who remain in detention and drop any charges against them, and allow reporters to work freely.

Reporters Without Borders has previously described Turkey as “the world’s biggest jailer of professional journalists”. So recent news of journalists facing arrest is perhaps not surprising, and certainly nothing new.

And Turkey’s role in the 2018 ceasefire was…

Raab’s tweet also shows a complete, perhaps deliberate, lack of understanding over the situation in Syria and Turkey’s role in exacerbating it.

In February 2018, the UN did agree to a 30-day limited ceasefire. But this had nothing to do with Turkey. In fact, Turkey made the situation worse by invading Afrin on 22 January 2018. The assault lasted two months until Turkey claimed victory on 18 March. This invasion wasn’t linked to the ongoing civil war but to Erdoğan’s obsession with attacking Kurdish communities. As the BBC reported at the time:

Turkey considers the US-backed Kurdish militia that controls much of north-eastern Syria a terrorist group.

Turkey says the militia is an extension of a Kurdish rebel group it has fought for decades, and wants to prevent it consolidating its hold on Syrian territory.

Both US and Kurdish officials insisted at the start of the Turkish invasion that there was no evidence the YPG (Peoples’ Defence Units) had attacked Turkey. And Afrin was actually one of the calmest areas in Syria, hosting tens of thousands of refugees with little international support. That is until Turkey decided to increase its attacks.

Although exact numbers are hard to prove, over a thousand people reportedly died during the Turkish invasion of Afrin, including civilians. According to the Syrian Observatory for Human Rights, 200,000 people fled the region.

Following the invasion, a group of British internationalists wrote a statement published by The Canary stating:

While Erdoğan and the turkish state claim that these attacks are needed in order to establish a ‘safe zone’, we are well aware of their true intentions which is nothing more than to displace the Kurdish population through genocidal warfare and further expand their imperialist grasp on the Middle East. We condemn in the strongest way this attempt by the Turkish state to threaten everything that has been accomplished here.

And as Ed Sykes previously wrote in The Canary, the Turkish invasion:

caused great destruction and misery in communities which had been at the forefront of fighting against Daesh (Isis/Isil) and which had been building a progressive democratic system in the middle of Syria’s brutal conflict.

While Turkey’s initial invasion of Rojava garnered international headlines, the ongoing situation hasn’t been covered as widely in the mainstream media. The situation hasn’t improved, and attacks are continuing. Additionally, as this thread from the Rojava Information Center sets out, Turkey is also cutting water supplies to hundreds of thousands of people:

Turkey has cut off water to 460,000+ people around Hasekah in North and East Syria for almost a week.

Meanwhile, it appears Daesh has benefited most from the Turkish invasion. And there’s mounting evidence of Turkey working with jihadist proxies in its attacks. Yes, Daesh, the enemy that the UK government has fought for years, is profiting because of the man with whom Raab is commiserating.

Following Turkey’s invasion in 2019, Kurdish forces were forced to ask the Syrian regime, and therefore Russia, for assistance. Previously, regime troops weren’t present in the Kurdish autonomous areas of Rojava.

So Raab’s condolences to Erdoğan are not only misplaced, they are insulting. Erdoğan did not need to invade Syria. He did not need to increase tensions and bring conflict to a previously peaceful area of Syria. Not to mention there’s evidence that his troops committed war crimes due to the use of white phosphorus in the attacks. But he did. And he did so because of his hatred for Kurdish communities and the alternatives that people have built there.

There are no excuses for the many atrocities carried out by the Syrian regime, backed by Russia. But it is Erdoğan’s fault those troops are there. And if you aggressively invade a country, there’s no point shedding tears when your soldiers get killed.

Erdoğan’s record at home is no better than his record in Syria. Despite claiming to be a democracy, elections are not fair and free. And in Bakur (the Kurdish area of Turkey), Erdoğan has removed democratically elected mayors from the Kurdish HDP (People’s Democratic Party) and replaced them with ‘kayyums’ (trustees) from his ruling AKP party.

Many terrorism trials in Turkey lack compelling evidence of criminal activity or acts that would reasonably be deemed terrorism, and the practice of holding individuals charged with terrorism offenses in prolonged pretrial detention raised concerns its use has become a form of summary punishment.

And in 2018, the  Permanent Peoples’ Tribunal (PPT) found Turkey guilty of war crimes for its actions in Bakur. As The Canary reported, the PPT “rejected the Turkish state’s characterisation of the conflict as a matter of terrorism”, saying “the war crimes and crimes against humanity determined by the court derive from the Turkish state’s refusal to recognise the Kurdish people’s right to self determination”. The tribunal also reported, “targeted assassinations, extrajudicial executions, [and] forced disappearances”. And it specifically said:

The Turkish state, …Erdoğan and the commander of the military operations… are guilty of committing war crimes.

Erdoğan’s record at home, in Syria, and in using refugees as pawns on the Greek-Turkish border is horrific. This is not a man or a country the UK should be doing deals with, let alone sending condolences to. We should be boycotting Turkey, not extending a hand of friendship to someone who’s essentially a fascist leader.

Raab’s endorsement of Erdoğan is disgusting. His comments show either a wilful ignorance of the situation in Syria, or a wilful desire to manipulate the truth to placate a leader the UK wants on side in post-Brexit trade deals. Neither is a good look. And both show that Raab is utterly unfit for his job as foreign secretary.